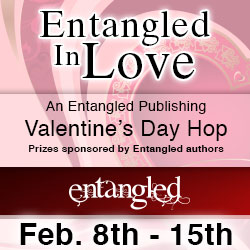 Click here to check out what the other authors are giving away during the Entangled In Love blog hop!

Bear with me, peeps.  I have never done a blog hop before.  Be gentle.

So a welcome to the new visitors!  I’m Cathy Yardley, author of TEMPING IS HELL.  (All you regulars — stop snickering!  Don’t shame me in front of new people! <g>)

A peek into how I came to write one of my favorite scenes in  TEMPING IS HELL.

I’ve been doing a lot of promo the past week or  so, talking especially about my worst job experiences.  I have had some doozies — and apparently, so have a lot of you, if the comments back are any indication! 😀

The first scene where my heroine, Kate, meets Thomas Kestrel, CEO of Fiendish Enterprises, is one of my favorites.  It’s one o’clock in the morning, and Kate’s trying to finish up a project so she doesn’t get fired. Thomas is initially suspicious — but soon realizes that the person singing “Baby Got Back” and dancing by herself is probably not a threat.  Especially when, frightened, she holds up a loaded stapler to defend herself.

Strangely enough, there’s a precedent for this scene.

I used to dance at work.

There was one job, one cube farm, that seemed to bring out the dancing fool in me.

I’d need to go to people’s cubicles, waiting until they were off the phone to ask some stupid piece of information before going back to my cubicle.  (Usually because they were ignoring my instant messages.)  While they were blabbing on their interminable calls, I usually found myself doing something to kill time.  Which was usually dancing in front of their cube door, waiting for them to notice I was there.

This was surprisingly effective.

So one day, I was waiting  for a co-worker to get off the phone, and I was bopping away.  When suddenly I hear the big manager — who was rarely ever on our floor — say behind me:  “Excuse me.  What are you doing?”

I froze.  Thought about it.  Swallowed hard.

“Sort of a mambo,” I finally replied, then shot him a grin and a look that said:  as if it isn’t obvious!

Professionalism.  Not my strong suit.

Which was why writing Kate was such incredible fun.

I’m giving away a $10 Amazon gift card to one lucky announcement list subscriber!  The winner will be chosen at random on February 16th.  To enter, just fill out the form to the right (that red box.)  Don’t worry: I don’t do anything weird or uncool, no spam.  And I send announcements maybe once a quarter — usually it’s either a book release date, or a special for my reading peeps.

May the odds be ever in your favor!  😀

Thanks so much, those of you who entered!  The winner of the $10 Amazon gift card is… Latisha D.!

Since my first paid gig as a writer in 1999, I've written fun love stories. Even when I tried to write angsty, I couldn't keep the humor out -- it's hard-wired. Now I roll with it. I've been letting my geek flag fly here for a while. Some of my favorite authors are Penny Reid, Courtney Milan, Tessa Dare, Charlotte Stein, Marian Keyes, Jim Butcher, Alisha Rai, and Patrick Rothfuss. When not writing, I'm usually chasing my son and two dogs around the Pacific Northwest, usually admonishing someone to either eat something, stop eating something, or put something down.

Enter your email address below to get your free book delivered to your inbox!

You have Successfully Subscribed!